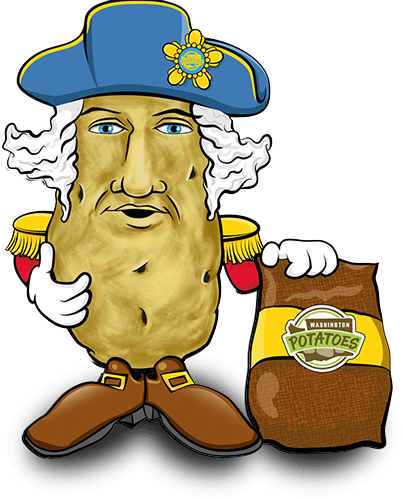 George will walk you through the cool stuff

Where did the Potato come from?

A high plateau in the Andean Mountains of South America is the birthplace of the 'Irish' white potato that we eat today. The plateau, known today as the Titicaca Plateau, stretches across part of the countries of Peru and Bolivia. The Aymara Indians developed more than two hundred varieties of the potato at elevations greater than 10,000 feet. Potatoes formed the basis of the Aymara Indian and Incan diet.

Potatoes also were an important influence on Incan culture.

Potato-shaped pottery is commonly found at excavated sites. Incan units of time correlated to the length of time it took for a potato to cook to various consistencies. Potatoes were even used to predict weather.

When did the potato become a staple food crop?

The potato quickly took the place of other crops as a food staple because it was a more reliable crop than wheat, which suffered as a food crop when the damp climates of Europe prevented proper ripening. Potatoes furthered both an agrarian revolution already underway in the early 17th century and a population increase in Europe in the 17th and 18th centuries. As a result, more and more farmers were drawn from subsistence farming into profit-driven economies. The agrarian revolution, stimulated by the potato, was integral to the Industrial Revolution.

European immigrants introduced potatoes to North America several times throughout the 1600s, but they were not widely grown for almost a century. Not until 1719, when Irish immigrants brought the potato to Londonderry, New Hampshire, were potatoes grown on a large scale. Again, potatoes were slow to gain popularity. Even when they became the second largest food crop in America, they were still used primarily as animal fodder.

What was the Irish potato famine?

Ironically, the dependable potato was responsible for one of the most horrifying famines of the last 200 years. Introduced into Ireland in the mid-1700s, the potato proved to be an ideal crop for its environment. Ireland gets an average of 60 inches of precipitation each year, in general too much for potatoes. However, the precipitation is mostly in the form of soft misty showers, which keep the air cool and the soil moist.

By the 1800s, Irish peasants were eating a daily average of 10 potatoes per person. Potatoes supplied about 80 percent of the calories in their diet. The peasants used potato fodder to feed their animals, animals which provided milk, meat and eggs to supplement the peasants' diet. This dependence on one food crop was dangerous, but no other crop had ever proved to be as reliable.

In the 1840s, disaster struck. Three successive years of late blight, the microscopic fungus Phytophthora infestans, and heavy rains rotted the potato crops in the ground. Without potatoes, both the peasants and animals went hungry. And when the animals died for lack of food, milk, meat and eggs were no longer available. More than one million of Ireland's 8 million inhabitants died of starvation; almost 2 million emigrated. The population of Ireland was reduced by almost one-fourth and has never regained its former numbers to this day.

Late blight and famine were not isolated to Ireland; the European continent was subjected to the same wet and cold weather and had the same poor crops. The new field of plant pathology was stimulated by these disasters. The German botanist Heinrich Anton de Bary published his findings on the complete life cycle of Phytophthora infestans in 1861. This was one of the first times that a fungus was identified as the cause of a plant disease. During the same period, people discovered several ways to control the disease, using lime in combination with either sulfur or copper sulfate, a Bordeaux mixture.

Today, scientists are constantly developing and studying new and different varieties to prevent a disaster like this from happening in Third World countries where the potato is, or could be, an important staple.

The climatic conditions, rich volcanic soil, abundant water and long growing season result in Washington State producing the highest yield per acre of potatoes in the world. Though the number of commercial growers number approximately 250, together they plant more than 160,000 acres annually, harvesting averages of 30 tons per acre, twice as much as the average yield in the United States. Washington State produces 20 percent of all U.S. potatoes.

One of the largest, most comprehensive, potato research programs in the United States is financed by the Washington State Potato Commission. Scientific research is done in conjunction with universities, the USDA, and private contractors. Currently, the WSPC invests nearly $1,000,000 annually in research projects and advocates for additional millions in federal and state legislative funding.

Are potatoes grown all over the world?

HOW DID THE POTATO GET TO EUROPE?

When the Spanish Conquistadors didn't find the gold and silver they were looking for in the late 1400s and early 1500s, they quickly cornered the local potato market. Potatoes were soon a standard supply item on their ships. The Spanish noticed that the sailors who ate papas (potatoes) did not suffer from scurvy. Scurvy is a disease associated with too little vitamin C in the diet. Potatoes have a lot of vitamin C (45% of your daily needs per medium sized potato), easily preventing scurvy.

No one knows exactly when potatoes were first planted in European soil. For many reasons, the potato was slow to become popular. At the time, only seed crops were grown in Europe, and this vegetable was planted by cutting it into pieces to put in the ground. The potato plant was also recognized to be a member of the nightshade family, a group of plants that are generally very poisonous. Amid fears of black magic and poisoning, it is thought that the first to cultivate potatoes were probably the families of the sailors who brought them back. By the late 1500s, historical records show that the potato began to be used as a common provision in some parts of Spain.

Potato cultivation slowly spread throughout Europe. When introduced into Germany in the 1620s, the nutritional properties of the potato were finally acknowledged. Frederick the Great, the Prussian ruler, ordered his people to plant and eat them as a deterrent to famine, a common and recurrent problem of that period. People's fear of poisoning led him to enforce his orders by threatening to cut off the nose and ears of those who refused. Not surprisingly, this was effective and by the time of the Seven Years War (1756-1763), potatoes were a basic part of the Prussian diet.

A similar story occurred in France. A young French agriculturist and chemist, Antoine Augustin Parmentier, made it his mission to popularize the potato after his experience as prisoner of war in Prussia. With some clever marketing to King Louis XVI and Marie Antoinette, and subtle scheming to convert the thinking of the populace, Parmentier achieved his goals. Potato dishes were created in great variety and the potato became a delicacy enjoyed by the nobility. The French populace soon coveted potatoes for themselves.

Who was Luther Burbank and what did he do?

At the same time potatoes soared in popularity as a food staple in Europe, their popularity also grew in the U.S. Known as the Irish potato, the tuber was soon grown in every state in the Union.

Seeking to improve the 'Irish potato', the self-taught and brilliant American horticulturist Luther Burbank took the first step. Growing twenty-three seedlings from an Early Rose parent, he discovered that one seedling produced two to three times more tubers of better size than any other potato variety he had yet grown. After testing this new variety, Burbank marketed the seedling he called the Burbank to the West Coast states in the late 1800s.

Cultivation of the Burbank spread throughout the Western States. Within a few short years, a mutation of the Burbank, which appeared to be more disease-resistant, was discovered in Colorado. The mutation had rough, reticulated skin and was named the Russet Burbank. Today, several varieties of the Russet are some of the most popular.

How did Washington State develop its potato industry?

However, widespread potato production is a relatively recent phenomenon. Specifically in eastern Washington, lack of sufficient rainfall and irrigation was resolved with the development of the one million acre Columbia Basin Irrigation Project. The Project's main goals were to provide cheap and dependable hydro-electric power and a constant supply of irrigation water to growers. Though the Grand Coulee Dam on the Columbia River was completed in 1941, irrigators had to wait until 1949 and 1950 for enough water to irrigate their fields. Outside the Project, individual growers have developed another one-half million acres of well-irrigated land.

Today, Washington potatoes are shipped to all parts of the United States and exported to the world marketplace.

Are potatoes still as popular as they ever were?

In the 1950s, potato consumption began to drop in the United States. It had risen steadily for over one hundred years, but tapered off with the advent of convenience foods and the mistaken idea that potatoes were fattening. In response, food researchers began looking at various ways of processing potatoes to make them more attractive and convenient for consumers. New techniques such as dehydro-freezing (freeze-drying), explosion puffing, and using infrared light to create a kind of seal on the tissue of the potato were developed. By the late 1950s, consumption was on the rise again. Today, more than half of all potatoes grown in the U.S. are used in the processing industry. 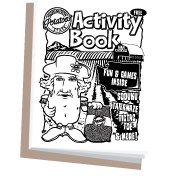