Agriculture has always been a big part of my life. Growing up with a Dad and Grandfather who were both farmers gave me a glimpse of a unique, hardworking, passionate community. As the years went on, I began to take more interest in the agriculture industry. My interest grew slowly, and before I knew it I found myself working in the agriculture field as well!

Agriculture is a major industry in the Evergreen State, and the potato industry alone creates 36,000 jobs throughout Washington while contributing $7.4 billion dollars to the state’s economy. Washington Potato Growers on average raise 170,000 acres of potatoes annually, on soil supporting the nation’s highest per-acre potato yields, which are 44% higher than the U.S. average.

Potatoes Around the World

Potatoes are such a versatile food, we can bake, boil, sauté, fry and do so much more with them. Regardless of where you are in the world, more than likely you will be able to find a food that contains potatoes in one form or another.

No matter who you are, there is almost always some sort of experience that sticks out in your mind from your childhood. Several of my standout memories revolve around agriculture and farming. 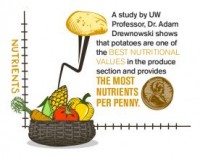 Today is no ordinary day….It is National Potato Day! This day definitely ranks in the top days of the year right with National French Fry day (July 13) and National Potato Chip Day (March 14). Potatoes in all of their forms are one of the most common staples that can be found at any meal on someone’s plate. From baked, to mashed, to fried and more! The ways to prepare and enjoy the world’s favorite vegetable are endless.

Watch a video from FOX News.

The Washington State Cougars win over Oregon State last weekend is bringing 66,000 pounds to food banks in Washington and Oregon.

Potatoes are planted in Washington during the spring. Planting will begin in some areas of the state during early March and will continue throughout April for the majority of fields around the state.