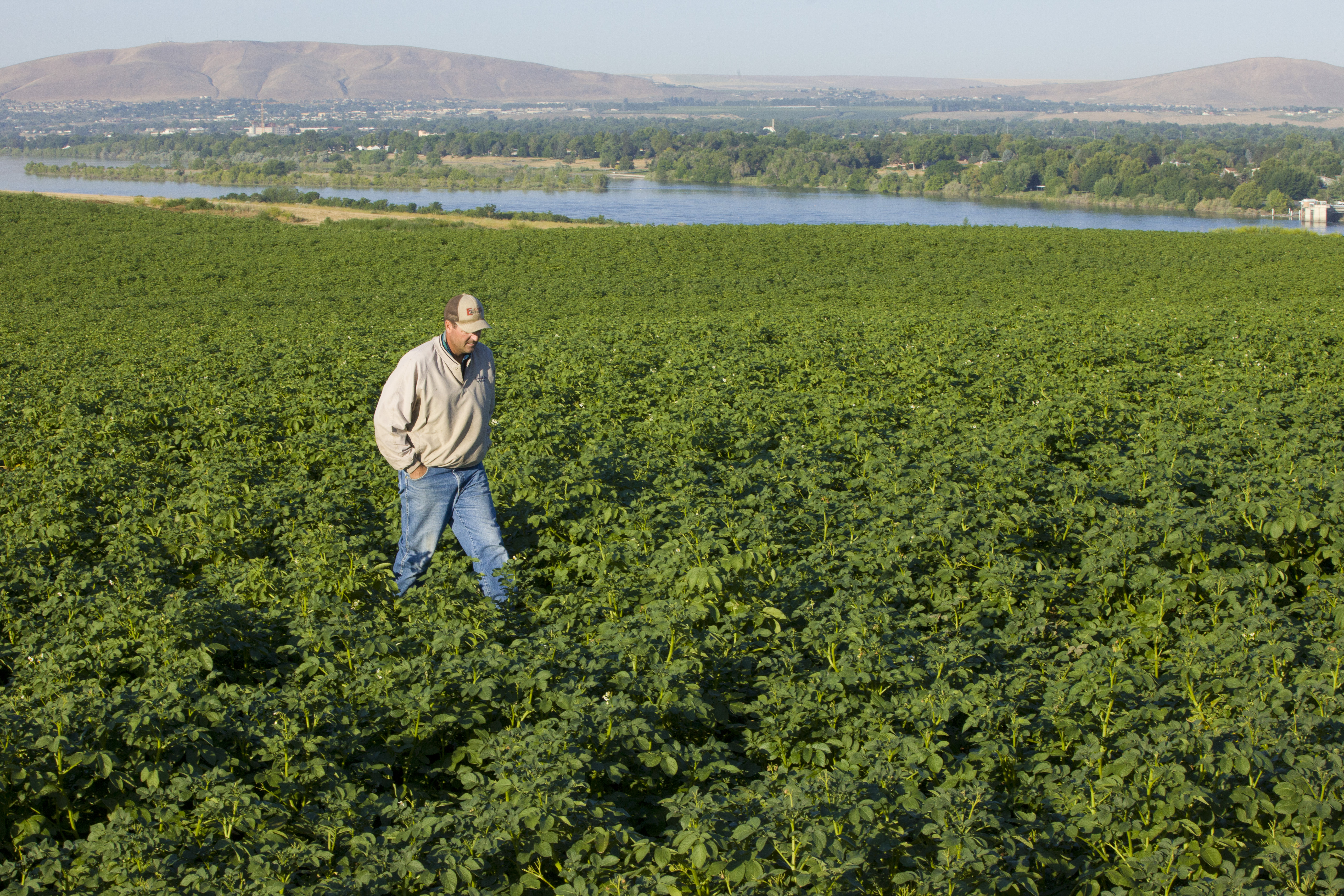 · $16,000,000 to assist in planning, designing, engineering, development coordination, and construction of pump stations or other improvements at the EL 79.2 or associated stations serving the same area that expand the delivery systems of the Odessa Groundwater Replacement Program (OGWRP), sufficient to irrigate at least 13,000 acres.

· $400,000 to assist the Grant County conservation district in applying for support from the United States department of agriculture-natural resource conservation service to secure federal funding for surface water delivery systems on the Columbia Basin Project.

· $5,000,000 for the continued development and building of the EL 22.1 OGWRP surface water irrigation system including a canal pump station, an electrical power substation, booster pump stations, and a large diameter full-sized pipeline sufficient to irrigate 16,000 acres.

The City of Othello also received $515,000 from the infrastructure fund for a long-term project to conserve water and to find ways to increase the city’s water supply. The project is in its second phase, with the goal of using outside water, in this case from an East Columbia Basin Irrigation District Canal, to help replenish the city’s aquifer.

POTATO U IS LIVE!

We are excited to announce that Potato U is now live! The Washington State Potato Commission in partnership with Washington State Potato Foundation and a grant from Three Rivers Community Foundation has worked with educators to create on online E-Learning Education Center called “Potato U”.
This center currently hosts a 6th grade curriculum centered around learning about potatoes and agriculture and is based on programming across all areas of education with State and National Curriculum Standards Alignment. This program is free to all, educators and homeschoolers alike. If you are interested in getting access to the program, please email Brandy Tucker at This email address is being protected from spambots. You need JavaScript enabled to view it. to receive login credentials. 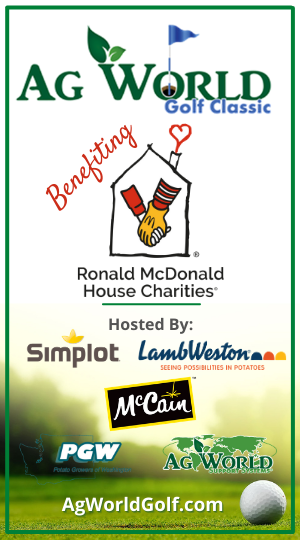 The Ag World Golf Classic will be held at TWO locations:  Tuesday, June 8, 2021 at Canyon Lakes Golf Course in Kennewick, WA and Thursday, June 10, 2021 at The Links at Moses Pointe in Moses Lake, WA. Those interested in either playing or sponsoring the tournament can register online at AgWorldGolf.com or contact Melanie Henninger Finch at 509-765-0698 x12. 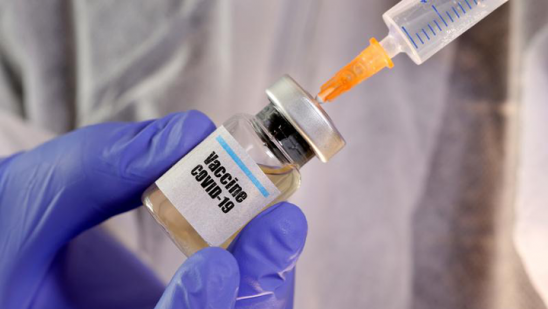 FRIES AT THE FIESTA 5K OLE 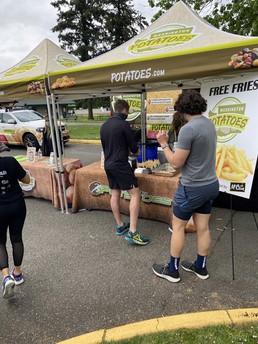 Ole! On May 1st, Frieda, the new Fry Van made her debut at the Fiesta 5K Ole. It was a nice spring day at Marymoor Park in Redmond, WA. There were 430 participants at this race who were very excited to refuel with some Washington french fries after their workout and collect some potato swag. Everyone at the event was excited to see WSPC and loved our high-quality french fries!
If you have an event coming up that you would like to see the Fry Van at, contact Brandy Tucker at This email address is being protected from spambots. You need JavaScript enabled to view it..

The Washington State Department of Agriculture (WSDA) is offering grants to small agriculture-related businesses in sectors that have suffered economically due to the coronavirus pandemic but have been left out of earlier relief programs.

The WSDA Relief and Recovery grants, funded through a partnership with the Washington State Department of Commerce (Commerce), are intended to assist small businesses in four agriculture sectors, which include:

The WSDA grants are a way to bolster the health and diversity of the entire state economy by supporting disproportionately affected and previously underserved agricultural sectors. These four sectors were selected because they did not qualify for other small business and agriculture COVID-19 relief programs.

The application period for the WSDA grants will be open for two weeks, beginning as soon as Friday, April 9. Visit agr.wa.gov/grants to learn more about each of the grants and whether your business qualifies. Businesses who do not qualify for the WSDA grants can visit commercegrants.com for information on other assistance available to Washington businesses. 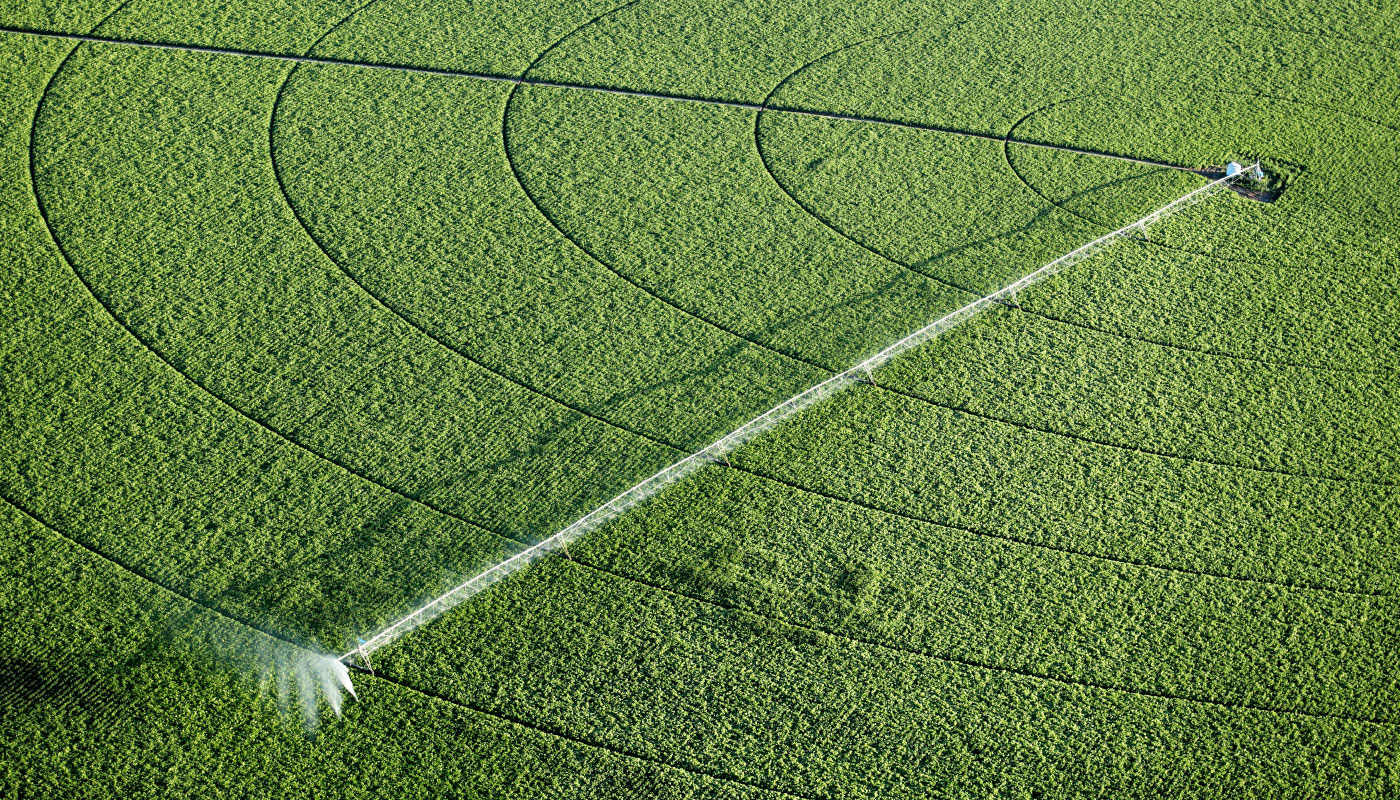 Washington potato growers are blessed to farm on magnificent soil and in a climate that produces the highest yield of potatoes in the world. They know that they are in control of this soil through their lifetimes, yet are committed to relinquishing it to the next generation of potato growers in a condition that will continue to provide those yields into the foreseeable future. That is why WA potato growers are fastidious about sustainability, that is meeting the needs of the present without compromising the ability of future generations to meet their needs. To meet this sustainability goal, WA potato growers practice Integrated Pest Management (IPM) to manage potato insect pests, plant pathogens, and devastating nematodes with the bare minimum of pesticide inputs, and manage their soils with well-conceived crop rotations, cover crops, and green manures that contain soil erosion and enhance organic content and nutrients, while reducing soil-borne pathogens and nematodes. They also use sophisticated irrigation systems that provide just enough water and nutrients to optimize potato yield and not so much that water and nutrients leave the field. WA potato growers continually invest in research, at nearly $1 million annually, to refine IPM, develop earth-friendly ways of overcoming insect pests, pathogens, and nematodes, and enhance soil health. In fact, the WA potato growers and processors recently committed $3.4 million to invest in the hiring and laboratory outfitting of a Washington State University Distinguished Endowed Chair in Potato Soil Cropping Systems. The interest generated from this endowment will provide this scientist approximately $120,000 annually for research to heighten the sustainability of WA agricultural soils. WA potato growers also care about the sustainability of the citizens of WA. In 2020 after the devastating COVID-19 epidemic shut down much of the private sector causing mass layoffs, WA potato growers stepped up to deliver over 1 million pounds of nutritious potatoes free to WA residents throughout the state. Now THAT’s sustainability!

POTATOES IN THE SPOTLIGHT 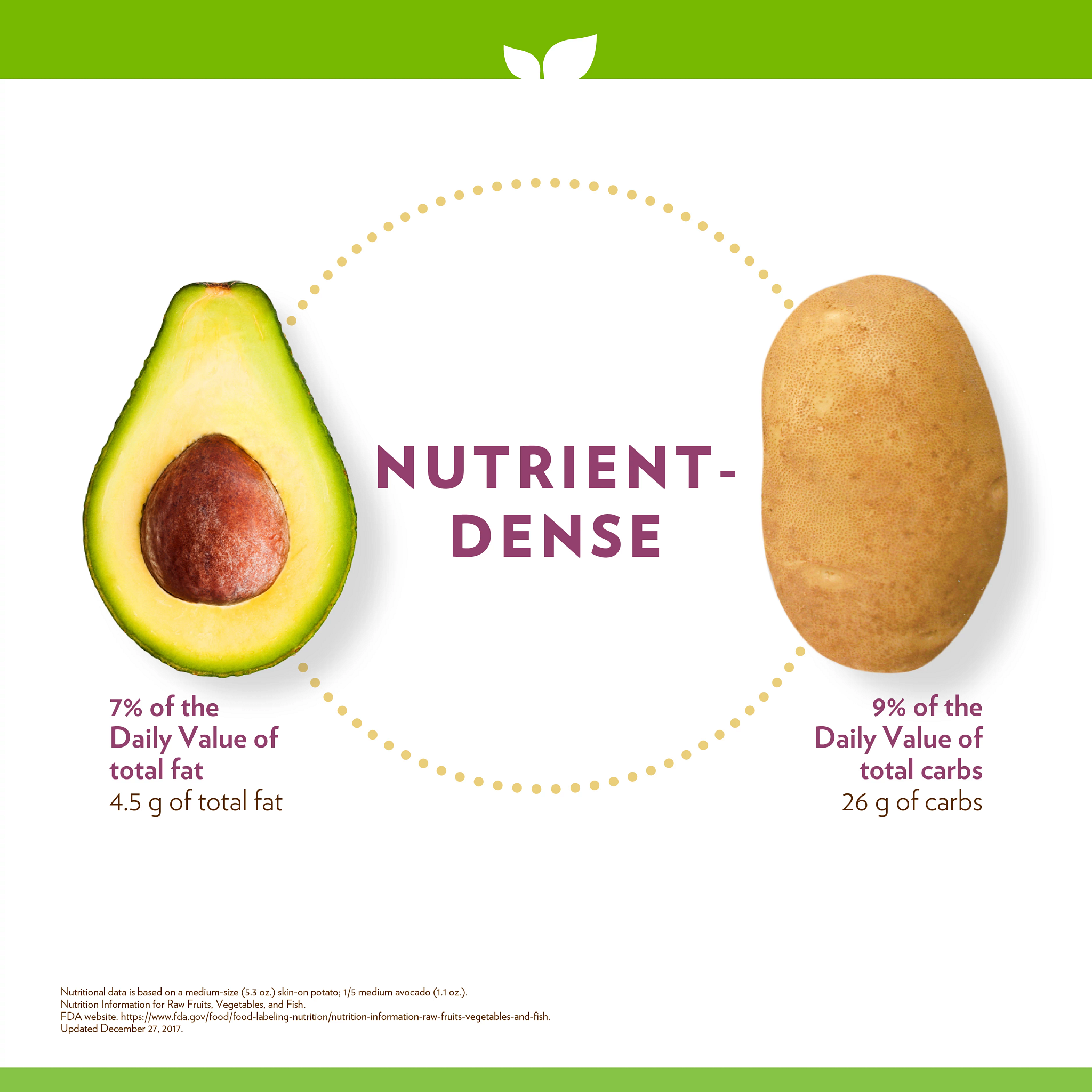 Men’s Health magazine published an 8-page feature spread on the nutritional value – and delicious taste – of potatoes in its recent May issue. The article, available online in May, addresses long-standing myths and misinformation that potatoes are anything but a nutrient-dense vegetable and good carb. The authors state, “One medium-sized baked potato delivers six grams of protein and four grams of fiber, as well as high amounts of bone-assisting calcium, heart-helping potassium, and immunity-supporting vitamin C.” Potatoes USA partner, Dr. Kathie Beals, contributes to the article by sharing which potatoes work best for different recipes and noting that all potato types are nutritionally similar. The article also offers several recipes and ideas for nourishing baked potato toppings.

Potatoes also continue to shine across other leading consumer media as a nutrient-dense vegetable and a source of key nutrients. Here’s a few other recent media highlights:

In a Real Simple article, Potatoes USA partner, Cara Harbstreet RD, highlights the nutritional value of potatoes. Harbstreet dives right into how potatoes are a great choice, from a nutrients per dollar stance, because they include eight important nutrients.

Purewow rounds up 20 plant-based protein sources – including potatoes. The article says, “all potatoes are secret protein powerhouses,” but gives red potatoes extra love noting them as an especially good source of iron, potassium, and fiber.

Insider calls out 11 foods higher in potassium than a banana – with potatoes topping the list. The article suggests eating home fries or hash browns if you’re craving a savory breakfast, which will also increase your potassium intake. Registered dietitian Amanda Nicole, who contributed to the article, adds, “potatoes are full of fiber and resistant starch, which can keep your blood sugar levels stable and prevent any blood sugar spikes or crashes that can leave you feeling tired and fatigued later.” 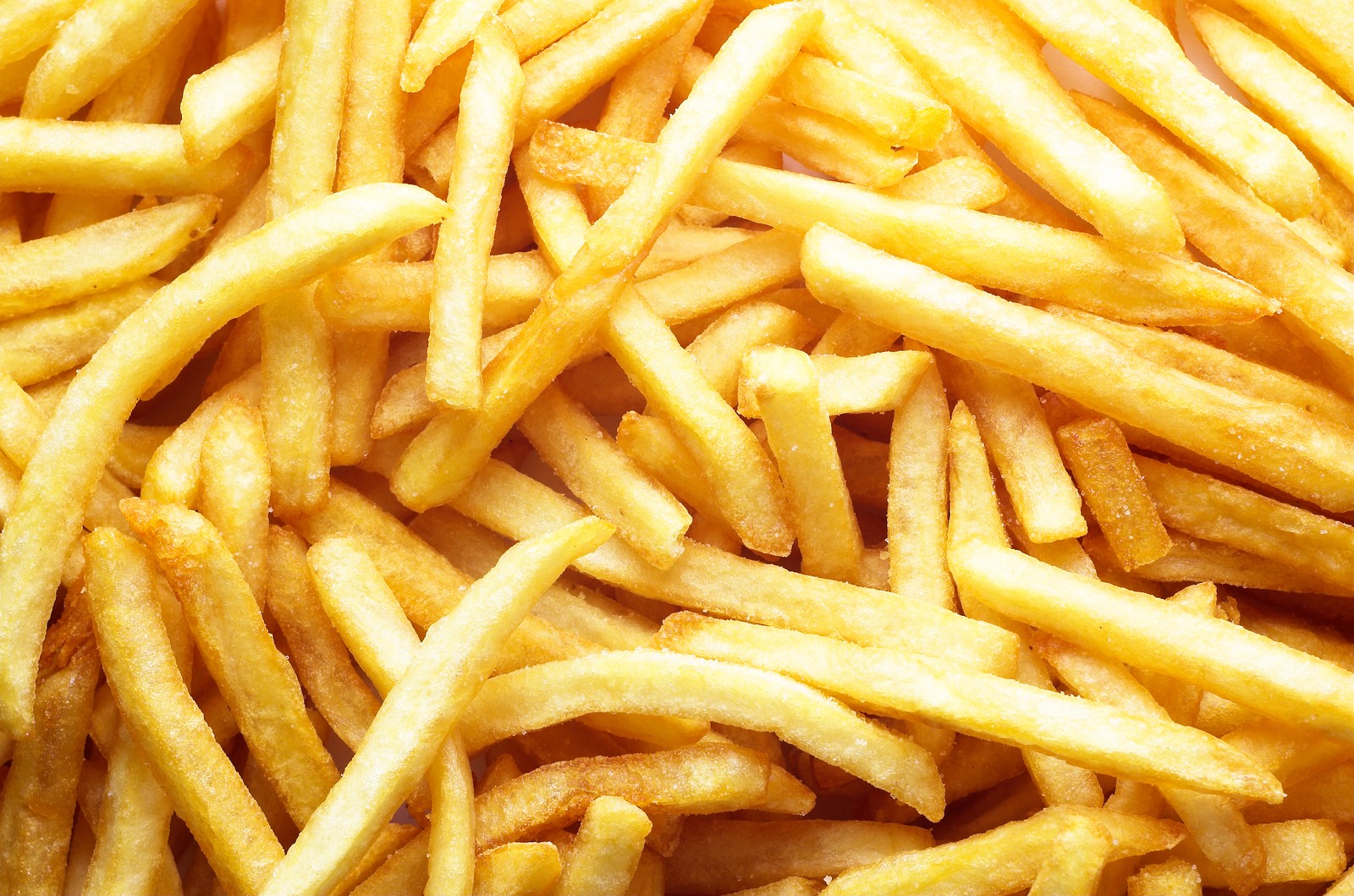 Last week Japan eliminated its remaining 2.1% tariff on US frozen fries (HS 2004.10) as a result of the tariff concessions secured under the US-Japan Trade Agreement.  Japan also further reduced the tariff on flakes granules and pellets (HS 1105.20) to 6.6%, and those tariffs on other dehy lines (HS2005.20), which now range from 4% to 8.6%. These tariffs will be subject to ongoing annual reductions on April 1 until full elimination occurs over the course of the next seven years.

Japan is the largest market for US frozen fries with exports valued at $268 million in 2020. Tariff-free access to Japan for US fries will therefore support the continued growth of exports to the market.  The Japanese tariff reductions enacted on April 1 are aligned with those Japan has committed in the TPP-11 trade agreement (which includes Canada and New Zealand) and those offered to EU Member States in the EU-Japan FTA. As a result, fries from these countries will also now enter Japan tariff free.